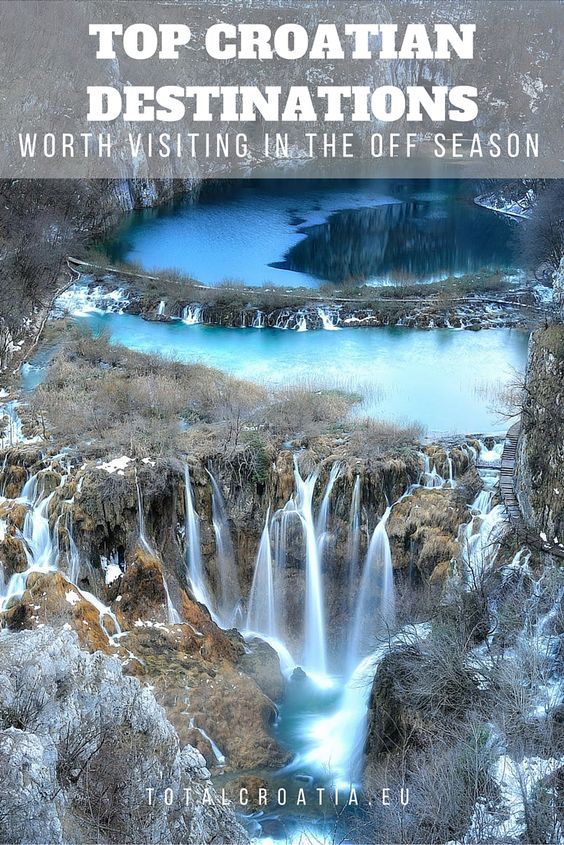 Top Croatian Destinations Worth Visiting In The Off

This small country of less than 4.5 million people has no trouble drawing a crowd with its jaw-dropping history, the great outdoors, flourishing festival scene and unparalleled natural beauty.

However, the jam-packed summer season can be overwhelming for the crowd-phobic.

Croatia has a rich offer all year round and visiting in the off season bring sparse crowds, lower accommodation rates and a different perspective on this south-European beauty. One of the most stunning examples of architecture, culture and history in Croatia, this south-Adriatic gem has become one of the top destinations in the world. However, dozens of large cruise ships that port there every day during the summer season can bring the rush of tourists and ruin everyone’s good time. The old town of Dubrovnik is rather small and even numerous alleys and side streets fail to bring shelter from the crowds lurking around every corner.

The shoulder season in May and September is the best time to visit if you wish to get away from the hustle and the bustle of the crowds, while still being able to enjoy warm sunny weather. What is more, in May Dubrovnik hosts its own four-day international film festival, enabling visitors to catch a glimpse of famous movie stars.

Winter is also great to spend a few days in Dubrovnik famous for its amazing New Year’s celebrations. Mild temperatures make staying outdoors in December enjoyable, and the sight of Dubrovnik adorn in Christmas lights is a unique and memorable experience.

Occasionally Dubrovnik gets a bit of snow in winter, which is always a fun sight to see since Dubrovnik people are not accustomed to snowy weather. Imagine how different your photos of Dubrovnik would be from everyone else’s! The biggest, the oldest and the most visited National Park in Croatia, Plitvice Lakes are at the very top of the list of the most popular attractions in Croatia. Stunning turquoise lakes, magnificent waterfalls, bubbling streams and lush green woods create a stunning oasis of unparalleled natural beauty. There is no wrong season to visit Plitvice, although the crush of tourists in July and August can slightly disturb the serenity of the place.

Similarly to Dubrovnik, the shoulder season in May and September ensures beautiful weather with fewer crowds and more time to spend enjoying vast beauties of Plitvice. Not only is the water volume at its highest during that time, thus making waterfalls even more alluring, but in September the nature is starting to prepare for winter, coloring the woods in beautiful brown, red and yellow colors.

If you are particularly adventurous, you should know that Plitvice look especially stunning during winter with their frozen waterfalls.

Oh, did we mention that from November to March the ticket is three times cheaper than during summer? In the recent years Zagreb has become one of the most popular city-break destinations in Europe. With flourishing culture and art scene, charming architecture, entertaining night-life and surprising legends and stories, Zagreb has an aura of quaint sophistication that has much to offer.

While the whirlwind of the summer season overtakes the Adriatic coast, come to Zagreb. A peak of season for coastal Croatian towns, Zagreb becomes almost deserted during summer months of July and August, allowing visitors to take in the appeal of the city uninterrupted by masses of people rushing to work or students late for school.

However, December is still a wonderful time to visit due to gorgeous Christmas markets offering mouthwatering Croatian specialties and fun winter activities on the slopes of Medvednica gora. Istria is best known for its world-famous truffles, esteemed wines, gorgeous green hills and charming coastal towns. However, during winter months Istria can offer its visitors quite a unique experience.

The town of Pula allows visitors to ice-skate in a Roman amphitheater. Yes, that’s right!

Roman Amphitheater in Pula is among the six largest surviving Roman amphitheatres in the world, as well as the best preserved ancient monument in Croatia. In December there is a small ice-skating ring there, proving to be a better activity than gladiator fights. Bet you couldn’t do that in Rome!

In February the best place to be is Rijeka. Although technically Rijeka belongs to Kvarner Bay, and not Istria, it is in very proximity of the peninsula. In Rijeka the time of carnival is lived more intensely than in other places in Croatia. The sight of thousands of people roaming the streets in eccentric costumes, giving into the festive aura and celebrations, is a bucket list-worthy experience!